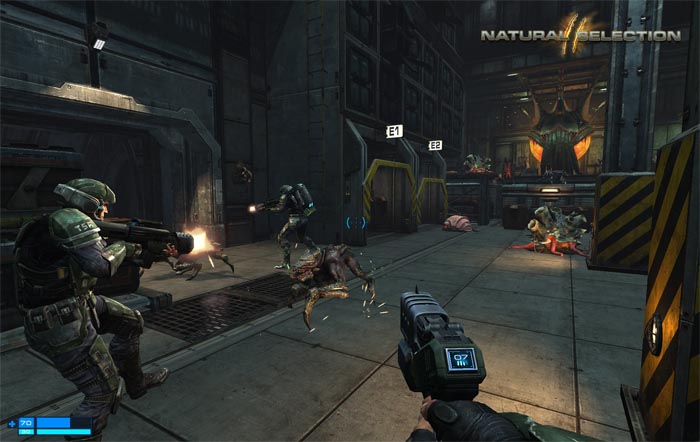 0. Please state your name and role in the studio.

My name is Charlie «Flayra» Cleveland, and I’m founder and Game Director at Unknown Worlds. Also, as a programmer, I love that you started your interview with «0». 🙂

1. Hi Charlie and thank you for taking the time for this interview. We want to start with a little bit of history. Can you tell us how you guys started some years ago with the Natural Selection project?

Sure. I was working at Stainless Steel Studios in Boston, MA (on a game called Empire Earth) when I started thinking about a «new» game idea: wouldn’t a FPS with RTS elements be the deepest and most fun game out there? I wanted to play RTS a lot more often than my friends who wanted to play FPS and putting the two together seemed like a natural fit.

The strategy enhances the meaning behind the action and the action could make the commander role much more dramatic. So, along with my friend and co-worker Cory Strader, we started playing around with ideas.

In March of 2001 I started working on what would become Natural Selection full-time. Luckily I had saved up enough money to last me a couple years…it would turn out to be a much bigger project than I had imagined! We released Natural Selection v1.0 as a free Half-life mod on Halloween of 2002. 20 versions and a few years later and we started working on a commercial sequel.

2. What do you think makes NS2 different from any other FPS on the market right now? How different from the original game do you feel NS2 will become?

NS2 started out quite different from NS1 and over time we’ve realized that some of those original design and other decisions are the best for the game. But none of us want to work on the same game again so there are some bold new changes. We’ve focused heavily on the dynamic elements of the game – the marine «power grid» system, dynamic infestation, welding, etc. and I think those features really stand out from other games. Our two sides (marines vs. aliens) really are totally unique (not just lip service!) and NS2 will be the most mod-friendly game ever released.

3. Which games or movies can you recall as a direct influence in the development of NS2?

The biggest influences are Starcraft 1/2 for their unique sides and RTS excellence, Gloom for showing me how atmospheric and different a «total conversion» could be and…Tribes, for showing me how amazing diverse online multiplayer could be. Well, and of course there’s the movie Aliens, which I watched almost every day for 18 months to keep me juiced…

As a company, we need to target both our existing audience and the wider FPS/RTS markets. We depend utterly on the NS1 community’s good will and support for word of mouth so they are the most important audience for us. After that we care about the wider FPS market and then the RTS market.

We wouldn’t be here without our community nor would we want to be. They’ve stuck by us for years, donated and kept our doors open.

5. We played the beta a during the past few weeks and notice the in-game action is frenetic and also noticed a steep learning curve to get the grip of the game. How do you plan to welcome the players who are new to the NS experience? are you going to include tutorial modes or anything like that?

We’ve had some difficulty trying to keep the game easy to learn. We believe games should be easy to pick up and play but this is challenging with a fast-paced and deep game like NS2. Most players don’t seem to play through tutorials (we don’t) and those can require quite a bit of tech that we don’t have (it’s essentially like making a small single-player game when we’re only building a multi-player game).

One thing we’re thinking about doing now is including tutorial videos in the main menu so you can watch those if you want to get a quick overview of the game. When we demo the game to people they seem to «get» it very quickly – so a quick guided approach like that might be helpful.

6. Once NS2 is out, are you guys planning on expansion packs, DLC or any class of new content for the game?

Yes! We put out 20 free updates to NS1 including 18 new maps, new weapons, etc. and we plan to do the same for NS2. We’d like to make all those updates free and part of the original game, but we’ll see how we do financially with the release. We really want to support the social and clan side of the game as well and are hoping to do a special update focusing on that.

7. From our mailing thread, you told us some time ago about being «a bunch of guys in a room with no marketing budget», which is probably the reality of the Indie developer. How can you describe the process of building up such a complex project, pros and cons of being on your own for the task.

Heh, yeah that’s us. I don’t know if I can summarize it for you but…it’s hard. We’re constantly looking for ways to get the word out about us (many people in our audience seem to not know we’re even making NS2!).

At the same time, we only have a couple programmers and are building all our own tech, so we need to find PR methods that don’t take much time or effort. Our main approach has been to start pre-orders early, get the tools or some early version of the game into players’ hands, and then update it as often as possible.

Currently we’re releasing a new version every week and now we need to start promoting those updates instead of just posting a changelog to our web-site.

8. Could you give us the highlights of the game for the people who doesn’t know about it.

The game has four high-level feature categories. There is no design document, we instead use these «pillars» as a guiding influence:

Two unique sides – Our marines and aliens play totally differently. One alien runs on walls. Another flies. Another smashes through doors. Most players play on both teams but they are different enough you may love one and hate the other.

Real-time strategy – There’s the full resource model, tech tree, economy and upgrades you’d find in a real-time strategy game here. Most players won’t have to know too much about it, but strategic players will love to sink into the depth here.

Dynamic environments – Aliens can cut out the power in a room, turning it black and powering down all marine structures. Alien «infestation» grows throughout the level, preceding the arrival of gooey, distinctly hostile animal-based aliens. Marines can lock and even weld doors shut, changing the map layout.

Unprecedented modding – NS2 will be the most modded game, ever. We’ve built all our tools frmo scratch, so that small teams (like ours) can build cool 3D games. We give you all the NS2 source code, our level editor, IDE and just about everything else you need to modify NS2 or make your own game. We expect to see tons of variations to the game as well as brand-new games. Of course we’ll make sure you can always play a «vanilla» game of NS2, but there will be lots more available.

9. How can you describe the response of the community during the beta phase? Did it met your expectations?

Overall it’s been quite good. Players are happy that we’re releasing new stuff all the time and seem eager to tell us what they think. They seem grateful to be involved with the process instead of us just dropping a finished game in their laps and saying «take it or leave it». We’ve been able to make progress much faster with 20,000 people playing the beta then if it was limited to these four walls! Players are able to send detailed bug reports and make and promote fan videos.
Also, the fact that we are shipping all the NS2 source code with the game, also means players can find and fix bugs as well! One of our our forum members diagnosed a problem with our damage calculation and send me the line of code to fix it. Another revamped our dedicated server interface and sent me the script via e-mail. I checked it over and checked it in and our game is better because of it!

10. You are working with your own custom engine and taking the hard work of creating something as huge as that from scratch. Why not licensing something like Unreal or Source?

We tried using Source (Half-life 2) engine and we ran into problems. If our game was a more typical FPS, I think licensing would have worked out great. But with our dynamic elements, our modding strategy and our committment to an amazing game, we knew that writing our own engine would give us the best results.

11. Once you get the fame, the women, the cars, the parties, the alcohol and all those beautiful things that comes with the success of such a big project, what’s the next step for the people at Unknown Worlds? any new projects under the hood?

Ha! Probably the first thing will be a vacation. We have ideas for our next project after that but it’s too early to say what kind of resources we’ll have for that. Right now, we’re totally focused on getting NS2 awesome as soon as possible! After we release v1.0, we’ll be working hard on improving, supporting and growing it. I can’t wait!